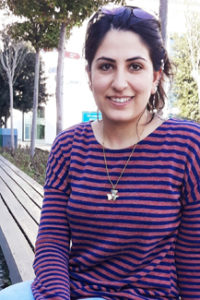 My name is Khadijeh, I am from a small city named Izeh located at south of Iran. During the school time, as a student, I found my interest in mathematics and having passed the university entrance exam successfully, I decided to major in electrical engineering through which I could practically apply mathematics to problems in different scenarios. Personally, I am very much interested in travelling and getting to know new people and exploring the world. I love cooking and spending time with children and playing with them.

In many applications such as IoT and sensor networks which are powered by batteries, energy efficiency is considerable. To enhance the lifetime of such networks, simultaneous lightwave information and power transfer (SLIPT) was proposed to use the received signal for both communications and energy harvesting. In other words, the light is modulated and transferred through the optical channel and reaches the receiver, which is typically a solar cell in SLIPT systems. The solar cell produces an electrical current which consists of two components including alternating current (AC) and direct current (DC). The AC component is used for information decoding and the DC one is used for energy harvesting. In this project, we explore SLIPT concepts in different scenarios such as indoor, outdoor, and underwater. We develop mathematical models for SLIPT protocols and derive fundamental performance bounds. Based on that we optimize the harvested energy for a given data rate and a given bit error rate.